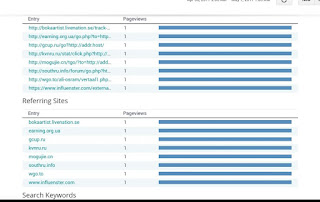 I've no idea why my stats say the things they do for this blog.
I had a bad weekend to end the month of April. I just assume forget it, or at least a part that I won't share with my wife since she feels it's necessary to not share details with me regarding most things.
She doesn't worry about the things I worry. Ignorance is bliss.
Would be nice to be debt free, but she doesn't care about how much we have, so she spends on what she feels we need.
I look forward to death. Debt won't follow me there, yet I feel like it's sending me to an early grave.
Treadmill of spending is the way I view my wife's perspective. She makes more, so she spends more, regardless of her salary not keeping up with the cost of living.
I don't regret having three kids. I just regret not having more money.
A guy I know has a gofundme page set up for his daughter's junior olympics bid. Nevermind that the guy sells houses and seems to have money to spend on himself.
Gofundme is littered with sad stories, and his just seems sad to be bunched into the same realm as those sadder ones. If I were shameless, I'd have a gofundme page to help with the various costs that would be nice to have someone else pay.
My Samsung washing machine is hardly 4 years old and has never acted well since we had it past 90 days. Would be nice to replace it, but we spent $600 on it and a new one costs just as much. I will never buy another Samsung product.
I went to HH Gregg to see if they had anything, but they were picked over.
Sad when stores go out of business.
Have I mentioned that I've been remodelling the main bath? My mom offered to pay for someone to do it but of the 6 places I contacted, on 2 got back to me and they both said they were too busy to take my money. I just don't have the motivation to do it all in a timely manner given I work and my wife doesn't let me have time to do anything the way I want to do it.