I should crop it, but meh, here's a screenshot of my stats from the original blog. 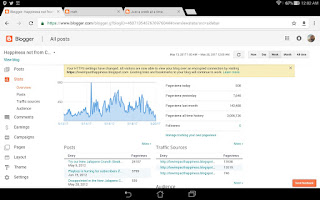 Yes, it says over 3 million page views. The AdSense balance has stayed at $10.71 for the last couple years, so I'm not sure what the traffic is doing. I blame the Russians and other foreign entities  for running bots to mess up the numbers, for I know no one is really reading my blog that's semi-abandoned.
I forced myself to blog daily once upon a time. It was stuff I saw from an article that listed stuff. Almost like my Dylblog, I had something which I was reacting...  but most of the time it was like a Diaryland thing or a meh about articles or news of the day. I had blogs about my family life and my work life but those matters were there as well.
I think I mentioned that I wanted my blogs to be more themed. This one is about my current mood of thought on a weekly check-in. I don't have a theme beyond it's less spastic than the original.
"Fake" actually seems to be a theme here.  The branding of blogs as being themed comes from Breitbart. I think there were a few like Big Hollywood and such that mocked the importance of things.
The weekly blog is self reflecting a lot of late.
I'm thinking of reviving all of my blogs as departments of my essence, rather than be confined to brain farts here, I'll summarize the week's posts from Dyland or link to them.
I'll have to create a list and have a summary of what each blog is about... like an annotated directory page. I like abandoning stuff, but I also need to improve upon  my hobbies.
Wait, did I just say I like abandoning stuff? I mean, I like leaving stuff as though I was done with it. Much like a novel, things get shelved as being complete. Blogs are weird in that only a drama queen would declare a blog complete, it seems... may be I'm just being silly.
I have bipolar disorder. My brain doesn't work like most people's,  I guess. That said, I have clutter than needs situated. Once I get situated I may be able to proceed and complete something worthwhile rather than piece mealing half thoughts and full meanderings.

I stole Dyland, a concept from Robert Zimmerman. Not THEE RZ, but rather a namesake who an obsession of mine called the "original Dylan" because I was the second Dylan in her life, though the original "Dylan" wasn't actually named such.
Mara Frazier of the Pegeen Penrose variety, here I find myself thinking of you. I loved you. Not the sort of love one thinks or thought when obsession is involved. I just had a bit of admiration and awe... given my mostly sheltered upbringing. Not sure you understood, but then again, I never quite did. Being married with kids, I can reflect upon my feeling and it wasn't love in the lust-mired sense. I was sad and lonely, so a lot of things blurred into a hope or such of tv like rendition of why I felt admiration and awe.
Sorry. Perhaps the unmitigated elements of my bipolar disorder made you abandon me to life absent of your friendship, but then again, I could be just a jerk, regardless.
On the 17th, I was listening to Freewheelin' Bob Dylan, and there's a certain song that makes me recall a time I saw you dance. Perhaps that's why you are here in my blog like a bird that whistles. I almost miss you, but I almost wonder about the meaning of the ending to Taxi Driver. I named my bike Betsy, remember? I like the name a lot, for it's my older daughter's name, as well. Neither are because of Taxi Driver, which is weirdly coincidental... my obsessions are well known to all but myself.
I hope you are well, but I wish nothing bad on people, for such things as spite do nothing but opposite of its point.
I suppose I'll probably need to create a template for my weekly blog, if I want to be organized. I could break down the days of the week with various links to the postings from all things Dyland.
Meh. I'm sure there's a way to have a static page have feeds update it dynamically like a Twitter feed, but I'm not hip on web stuff like I used to be.
I used to have an invisible child called "The Vonnegut Zone." When I was frustrated with no job prospects and ample time, I worked on GeoCities page I created from scratch HTML. I had a workshop once upon a time on HTML, so my HTML skills was something I worked upon.
People who know me, know that I am prone to obsessions. My current obsession is Scott Adams, the co-creator of WhenHub. He's a lot like Rush Limbaugh in that he failed a lot and got successful by not quitting. Andy Warhol and William S. Burroughs are also people I find intriguing.