I've had the same route almost since I got taken off of limited duty  back in June. It's easy, since it's a bulk route with the box truck, but I hadn't been able unload pallets until Wednesday.
I had to come in at 8am to get forklift certified, so I had to be off the clock by ten both Tuesday and Wednesday nights to avoid 10/14hour time clock violations.
It was nice seeing my girls before bed, but getting up before 8 is rough on me, considering I usually go to bed around 2.
Friday, Betsy's school had donuts with dad. Thankfully, Jennifer was off so I didn't have to take Darcy. 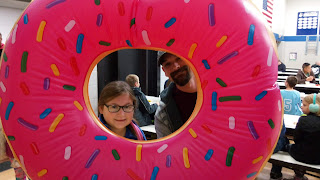 Donuts are my weakness. I have to avoid sugar and cholesterol the next few weeks until I have my blood work done for my annual physical.
I had a long Friday. Kohl's had 5 skids waiting for me but I was waiting in a cage for 30 minutes before someone let me in.
They would have filled my truck if they had given me everything that were supposed to have had ready for pickup. 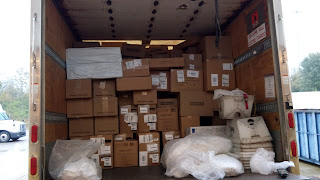 Jennifer worked yesterday, and Kiefer was camping, so I had the girls. They didn't let me sleep in. I slept in today so naturally Jennifer was mad at me.
Posted by Dylan at 9:01 PM No comments:

I pick fights. Usually I feel like I'm taking a logical stand against tyranny, but the end never comes to such an equation.
I won a long feud with Samsung. I've lost against Menards. I've come out ahead against Humana. I'm sure there are other matters that I got into a back in forth, but the most recent has been with Chase.
In early 2017, I consolidated the majority of our credit card debt with transfers to my Freedom card at 0% interest for 15 months in exchange of a mere 2% transfer fee. I was saving money, regardless of the fee, so I was happy with Chase until I noticed a $3250 charge for a hotel in New York state. I've never been there, nor would I charge on a card I was carrying a balance. Chase never contacted me. I contacted them prior to getting my statement a couple days after the charges posted.
I had the charges waived, but I had hours of phone calls over several months to fix everything associated with the fraud.
With the matter cleared, a puzzle still lingered. How did my credit card get used when I only used it for online balance transfers? It was a brand new chip enhanced card. Only explanation is that Chase was compromised.
Chase stonewalled me about the particulars, so I dropped the matter. I expected a big announcement like the Equifax or Wells Fargo scandals, but nothing ever came to the media's attention of that nature, so I gave another go at finding out how my card was used and how CARD laws were broken.
I've been given very suspicious replies rather than answers. Rather than deny my concerns of internal theft, I've been told only a law enforcement agency with court authorized subpena power can get any info regarding my fraud charges.

I hung pictures today. It's been a while since I felt like it. I hate measuring and all the spacing involved. In the end, I am glad, but it always goes slow. I tend to hang 9 at a time. Here's the first couple: 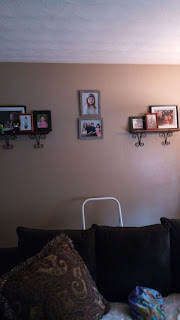 It rained, so I had nothing better to do. Wife was happier than normal, but still annoyed at my speed. Steelers were playing and I did have to eat.
She wasn't too annoyed with me yesterday, for I took our son out to do some volunteer work towards his Life Scout Ranking. I am not a morning person, yet I spent my morning spreading seed in a future wetland for the MetroPark.
It felt good to be doing something, but I ended up taking a nap in the afternoon.
I think I have worked 40+ hours the last 4 weeks. Normal people do it every week, but I'm not fulltime and my job involves manual labor. Using a hammer on the weekend isn't something I pursue.